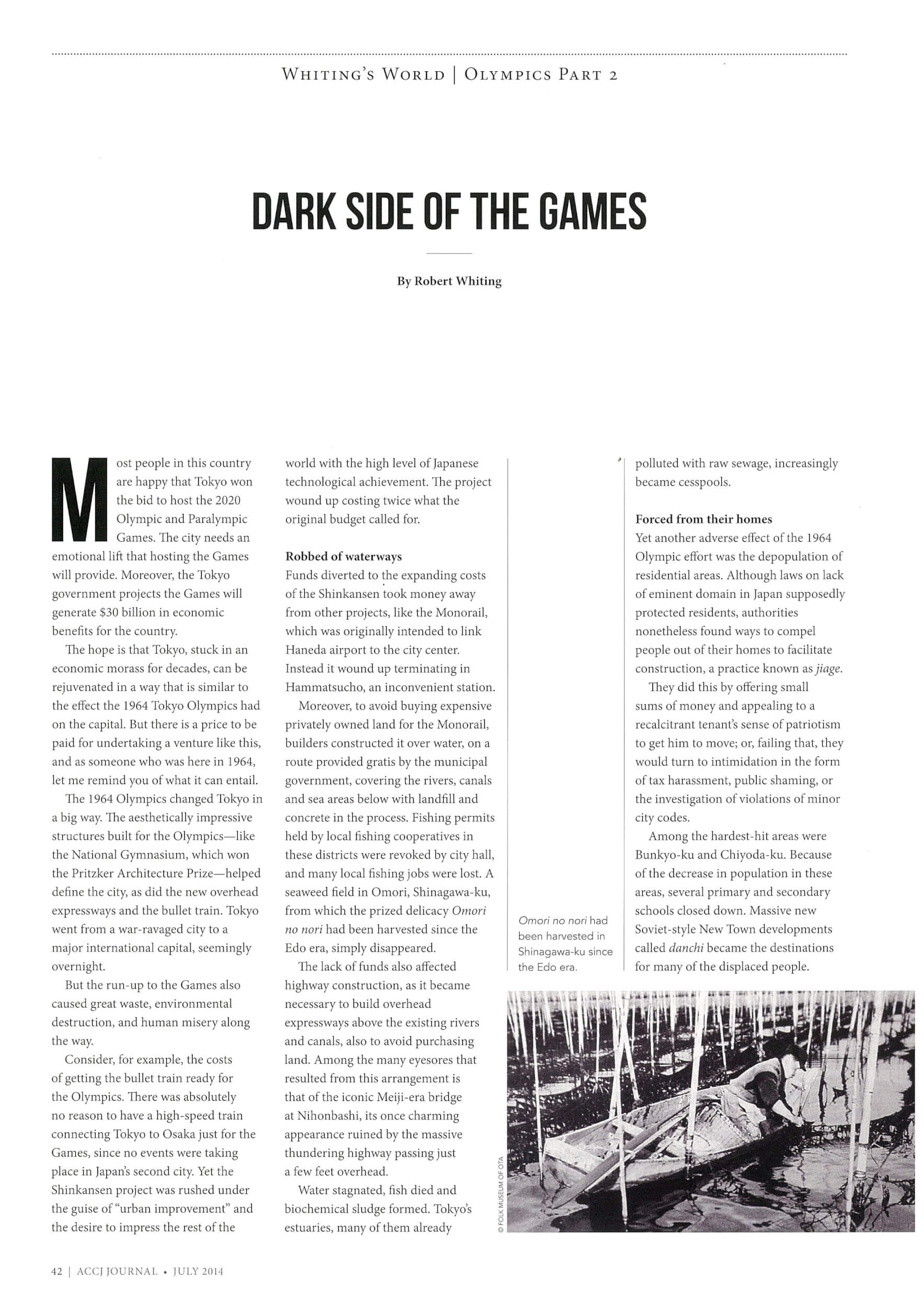 With emotions running high on the perceived injustices surrounding the proposed Olympic stadium project, it is vital to separate two core issues to achieve any meaningful understanding and hope of correction. The first core issue is socially sustainable planning; the second is architecture. With regards to the former, and according to an excellent article by Robert Whiting in the July 2014 ACCJ Journal (“Dark Side of the Games”), morally and socially corrupt practices leading up to the 1964 Olympics projects are evidently once more in play in the planning for the forthcoming 2020 event. History appears to be repeating itself, in this case as in the last, due to an ill-informed and apathetic electorate that historically is incapable (if willing) to challenge authority.

For the handful of activists that are trying to make themselves heard, in small part through mainstream media and more diffusely through social media, their voices of concern, bordering on outrage are shrill and confused, primarily because of their confounding the core issues: architecture and planning.

Architecture is a complex, emotional and above all subjective act of will and vision. The bolder it is, the less it will be immediately understood by the general public, which often leads to rejection and outright revolt. Hadid’s stadium design has been compared to a “bicycle helmet”, which ironically resonates with Tange’s 1964 Yoyogi Olympic National Gymnasium, the form of which according to the architect is derived from a Samurai’s helmet. While derivative of iconic apparel that is at least Japanese, what a warrior’s helmet has to do with sports that are celebrated for their bellicose neutrality is a mystery, particularly in post-war Japan. Detractors likely abounded in the lead up to this 1964 gymnasium project, but it has proven, from day one to be a timeless masterpiece of architecture (and engineering) that has inspired legions and generations of young students of architecture around the world, yours truly included, with its mixture of bold, unconventional lines and sublime grace. It also contributed to Tange winning the prestigious Pritzker Architecture Prize.

The 1964 Olympic National Gymnasium is truly an aspirational (and inspirational) building beyond its time, and leans forward courageously towards the future. It is ironic that had the corrupt social practices as detailed in Whiting’s article not been a reality this building, and it’s sublime companion the Swimming Stadium, would likely never have been approved, budgeted or built.

Hadid’s “bicycle helmet”, as a metaphor may be less iconically Japanese, (although one could argue otherwise). At least it relates to sport, if one wants to take the moniker created by aggrieved and aesthetically challenged critics seriously. (Hadid, incidentally, is also a recipient of the Pritzker Architecture Prize.) Like Tange’s gymnasium, however, the proposed stadium is a timeless masterpiece of architecture and engineering, leaning forward into the future with the boldness and grace one has come to expect of accomplishments by the best of Japanese society in its most enlightened state. Hadid’s stadium will be an astonishing addition to the pantheon of modern monuments that make Tokyo a world city. It will take its place in the center amongst most of the phallic and commercial shrines that occupy the front row.

Like Tange’s provocative predecessor, Hadid’s avant-garde statement will also likely be the beneficiary of socially corrupt practices, embedded in the politico-construction industrial complex, deaf to voices of dissent. Unlike some of the questionable and socially disruptive planning initiatives proposed, The new National Stadium is, and always will be, architecture of a grand and technologically advanced scale, as befitting a host city of 35 million and counting, in the 21st century. Admittedly, at the expense of a nondescript pre-existing stadium, as well as the displacement of, not residents, but several groves of trees. In my view this is a small price to pay for an extraordinary amenity and a timeless architectural masterpiece.

Relocation of residents (elsewhere), unseemly expenditure of public funds in a time of real or perceived crisis, a lack of engagement of, and accountability to the electorate as well as other grievances are, while of great import, irrelevant or at most peripheral to the selection and execution of Zaha Hadid as architect and her stadium as a righteous architectural tour de force. The confused logic inherent in the minority dissent, combined with Tokyo’s historically exclusive political processes, (machinations of a barely concealed oligarchic system of governance masquerading as a social democracy) will likely exploit disorganized protestations and roll on without pause. In the case of Hadid’s Stadium, the result will be the fortunate outcome of its realization. The National Stadium, unfairly the lightning rod of minority discord, is worth all the bother.

The anti-Olympics protestors, social activists, concerned dissenters and seekers of egalitarian justice are well advised to tune their collective voice and focus their scattered logic on the very real social, political and qualitative environmental issues, as outlined in Whiting’s article. Thence they may stand a chance (though unlikely) of being heard. Demagogic aesthetic criticism, devoid of cultural, critical and intellectual substance, of a single project chosen unwisely as representative of the ills and evils of political insensitivity, will get them nowhere.

No one of import is listening anyway.